skip to main | skip to sidebar

The Hood River Chapter of the Gorge Heroes Club met on the 4th Wednesday of October at WAAAM - the Western Antique Aeroplane and Automobile Museum in Hood River to ready our monthly shipment of care packages to our deployed heroes.
GHC would like to thank it's Baking Team and community members for baking dozens of cookies that GHC shipped to the members of the 3-116 CAV - Oregon National Guard Members.  Between GHC's Hood River and The Dalles Chapters we where able to ship off over 40 large boxes of homemade goodies! 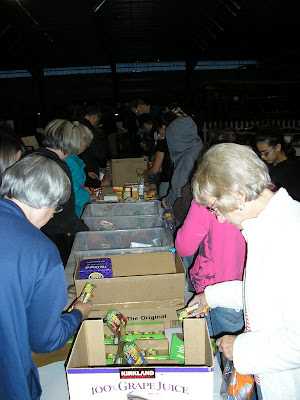 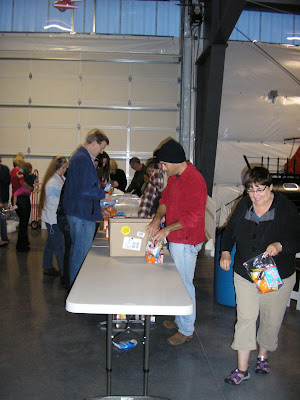 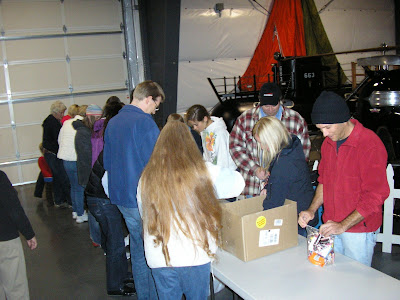 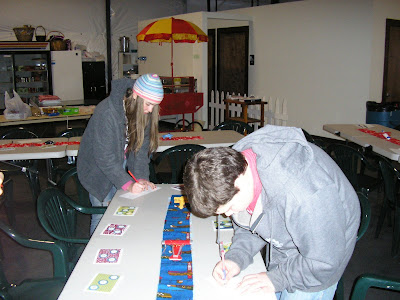 Oregon National Guard member Sgt Hall's children, Mikey and Maggie came  to put together a special package for their Dad.
If you would like to find out more about The Gorge Heroes Club and ways that you can help our military heroes, please drop us a line at: ghc@gorge.net

Oregon National Guard Spec. Chris Haskins took time away from his busy schedule to prepare for an upcoming deployment and visited two sixth grade classes at Wy'east Middle School. His new fan club, led by teacher Sally Prichett, has mailed letters of encouragement to Haskins, who is now receiving advanced training at Camp Shelby, Miss., before leaving for Iraq with more than 500 other Guard members from Oregon that are part of the 3rd Battalion, 116th Calvary Brigade Combat Team. 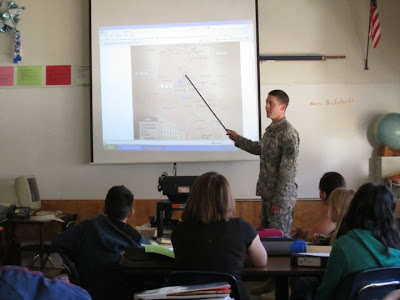 Spc Haskins talking to the students about the region he is being deployed to. 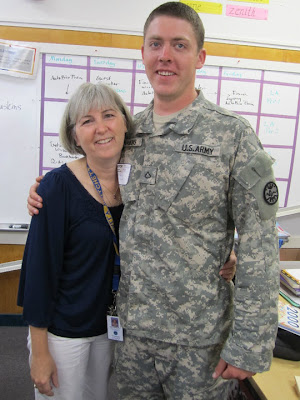 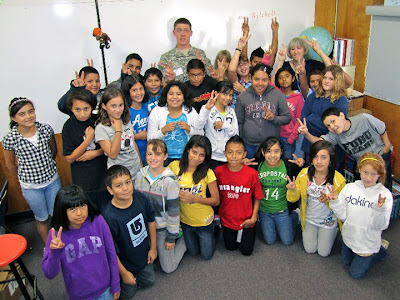 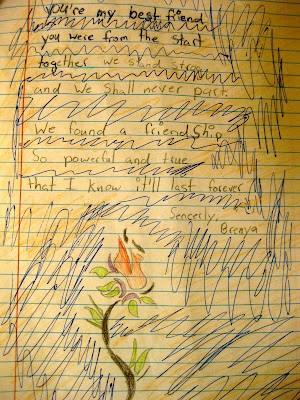 Above is one of the many letters Spc Haskin's recently received from the students.

GHC Gears Up For The Holiday's

The holiday's are fast approaching and GHC's Sewing Team is busy at work providing over 285 handmade Christmas Stockings for our Hometown Heroes this holiday season! 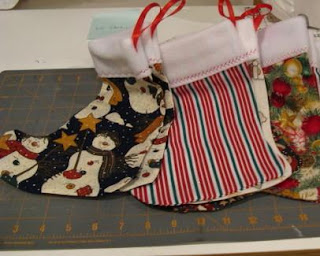 The Gorge Heroes Club currently needs donations of holiday print material to finish the project.  If you can help, please contact us directly at GHC@gorge.net

Start cleaning out those closets and organizing your garages.  The Gorge Heroes Club will be holding two Troop Support Rummage Sales on November 20th.  The dual Rummage Sales will take place at both the Hood River and The Dalles Oregon National Guard Armories on the same day!  We have two Armory floors to fill and all your donations are tax deductible.

So, mark you calendars now!  It will be a fun filled day and a great way to support our Hometown Heroes. 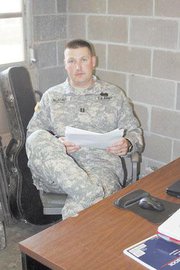 Capt. Seth Musgrove looks over dispatches in his command post at Camp Shelby, Miss., last week. Musgrove, the commander of Ontario’s Oregon Army National Guard unit, said his outfit is focused and ready as it starts a long training stint at Camp Shelby.

﻿Camp Shelby, Miss. — David Glassock said he will never forget the way residents of eastern Oregon and Ontario rallied to say goodbye to his Guard unit a couple of weeks ago.

“It (the send-off) was the best in the state. The community support was excellent. We had people along the entire route. It was nice. It made me feel like we were being supported,” he said.

“While still early in the training session, Musgrove said his company is doing well. Still, he said he understands the sacrifice his Guardsmen make to be away from loved ones.

Glassock joined more than 450 members of eastern Oregon’s 3rd Battalion, 116th Cavalry Brigade Combat Team as it flew to Camp Shelby Miss., recently for training to prepare for a deployment to Iraq later this fall.

The 3rd Battalion consists of Guard outfits from Hood River, The Dalles, Hermiston, Pendleton, La Grande, Baker City and Ontario. The unit received notification in April regarding a deployment to Iraq.

While Glassock, a Hillsboro resident and a sergeant with the Ontario’s Charlie Company, 3rd Battalion, 116th Cavalry Brigade Combat Team, said he was impressed with the send-off from eastern Oregon residents, he also noted the encouragement his unit collected from local people.

“Every time we went somewhere (in Ontario) everyone said ‘thank you,’ ” Glassock said. “I’ve not experienced that kind of ‘Hey, good job’ since the (first) Gulf War.”

The farewells showered on the 3rd Battalion — including Glassock’s unit — marked the beginning of a new phase of training for the entire battalion.

Now at Camp Shelby, the 3rd Battalion join similar-sized units from Montana and Idaho to put the finishing touches on an intensive preparation program. The training regime began in June and included a three-week-plus stint on the high desert south of Boise in August.

One new difficulty Guardsmen from Charlie Company face is the unique climate of Mississippi, according to the unit commander, Capt. Seth Musgrove. “I think the biggest challenge right now is getting acclimated to the weather. Especially the humidity,” Musgrove said.

“I think the biggest challenge right now is getting acclimated to the weather. Especially the humidity,” Musgrove said.

For a group accustomed to the weather in western Oregon or the high desert climate in the eastern part of the Beaver state, the unique conditions in Mississippi proved to be a minor shock. Musgrove said, however, his group is learning to overcome the local environment.

“It (the weather) is not a factor in terms of performance. It is just one of those things you deal with,” Musgrove said.

Charlie Company, along with other units in the 3rd Battalion, will conduct a series of training exercises while at Camp Shelby. Guardsmen will be instructed on various weapons systems, become familiar with the U.S. Army’s main means of transportation in Iraq — the Mine Resistant Ambush Protected (MRAP) armored vehicle — Iraqi language training and conduct convoy escort training. The convoy escort instruction is critical, Musgrove said.

“In my mind that is the biggest piece (to training) as well as working through all the sub-tasks associated with convoy security,” he said.

“It is tough being away from family. And family is always in the back of a Guardsman’s mind. I think it is healthy to think about it. But you’ve got to be mindful it does not consume your thought process. You know, we still have a job to do,” he said.

Story by Pat Caldwell - embedded with the 3/116 CAV
Special to the Argus Observer
GHC would like to thank the Oregon Military Department - Oregon National Guard for giving us special permissions to reprint this article on our website.

Oregon Gov. Ted Kulongoski will deliver a state flag to the family of Army Chaplain (Capt.) Dale Goetz at Saturday’s memorial service in Hood River to honor the fallen soldier.


Please visit the below link for the full article that appeared in today's editon of The Dalles Chronicle:

The Memorial Service will take place this Saturday, 2PM at the Horizon Christian School in Hood River, Oregon.

YOUR CONTRIBUTIONS CAN BE MAILED TO: 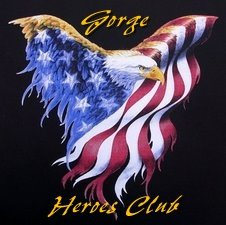 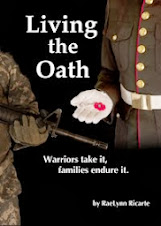 Warriors take it, families endure it. Click the image for more information about this compelling book written by GHC's Founder, RaeLynn Ricarte

About The Gorge Heroes Club

The Gorge Heroes Club is a volunteer led 501 (c) (3) non-profit , non-partisan organization based out of Hood River, Oregon. Our members come from all walks of life from all age groups and are dedicated to showing our support for military personnel from the Oregon/SW Washington and beyond year around.

Ways you can help:

We can use volunteer help to man community booths for fundraisers, collect donated items, disburse flyers and help with other troop support projects. Do you or someone you know knit, sew or crochet? We need volunteers to make hats, cooling scarves, sand scarves and other items needed by men and women serving in the armed forces. Donation of items needed can be found here "Care Package Supply List" Any donated items can be dropped off at the following locations:

The Western Antique Aeroplane and Automobile Museum in Hood River, Oregon. Hours: 9AM to 5PM - 7 days a week.

For more information about our organization, please contact: ghc@gorge.net

The Gorge Heroes Club is honored to be supporting the following HEROES:

Show your support for our Heroes! The GHC support bands come in various colors and sizes. Looking for a bulk order for your group, organization or family? Please contact us directly at: ghc@gorge.net

Shipping is included for all continental USA locations and military locations.

Here is a sampling of items that our Heroes could find in their monthly care packages. Your contribution of $12/package goes a very long way to cover the cost of these items and the postage! (The postage for each box is $10.95 alone... so $12/package is an awesome deal!)

Item donations for care packages can be dropped off at the Hood River News Office in Hood River, Monday-Friday, or contact GHC directly and we can come and pick up your donated items: gorgeheroesclub@yahoo.com

All donations are GREATLY APPRECIATED! 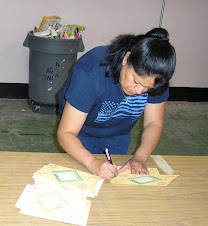 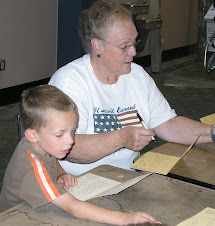 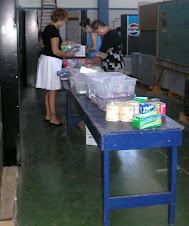 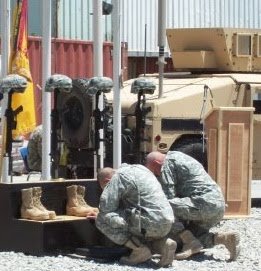 The Gorge Heroes Club pays tribute to those who have died defending our freedoms. We will be forever grateful for their sacrifices.

6080 - Total number of American Troops that have died in the war on terror, to date, are: